skip to main | skip to sidebar

Hello again, with ongoing coverage of my custom model dogs!

I have no updates on the Irish Setter CM today, as I haven't made any changes to her since the last blog.

However the Breyer Labrador to Labradoodle custom is progressing well:

I have made some changes to her head, re-sculpting the beard and ears to make them stand out more. She has her tail, now, as well.

So she is now almost 100% re-sculpted. Only her nose and the paw pads of the right forefoot and left hind foot are from the original Breyer Labrador.

She should be ready paint soon, after I check over her one more time for mistakes!

And here are some other dogs in progress:

Traditional scale Bearded Collie, 100% original sculpture done in polymer clay. I've been working on her for over a year, now.Still a long way to go!


Will be for sale once completed!

And there's this poor little thing: 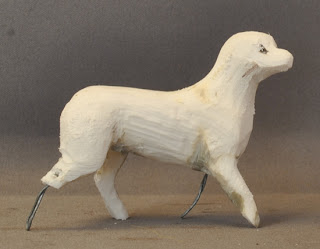 Formerly known as the Breyer Jack Russel Terrier, I'm not sure what she'll be next. I'm thinking a Havanese, or something similar.

Until next time!
Posted by Dragon Ridge Studios at 12:48 PM No comments:

Back again! First of all, I am announcing Dragon Ridge Studios new website:

It features my gallery of model horse and dog customs, commission prices, and lots more! Go check it out when you're done here. :)

Now, I know I've been away from the blog yet again, but still busy with the Irish Setter custom. Here is her progress:

Right after the last blog entry, I took some more off of her feathering: 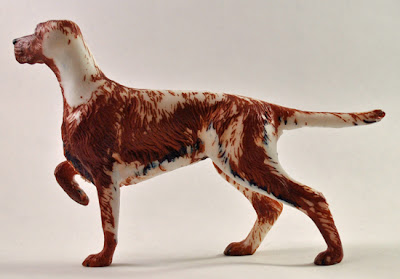 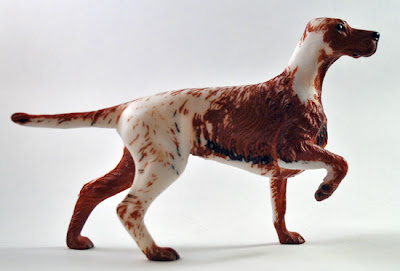 And her most recent look: 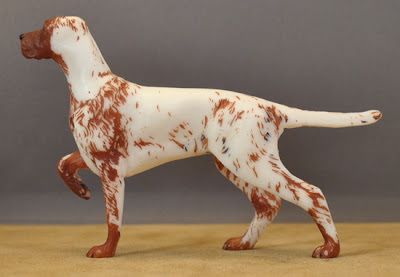 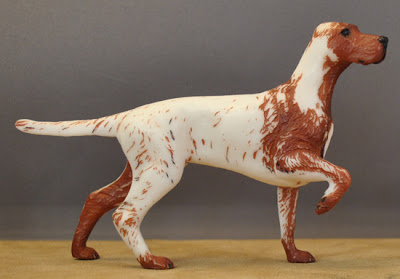 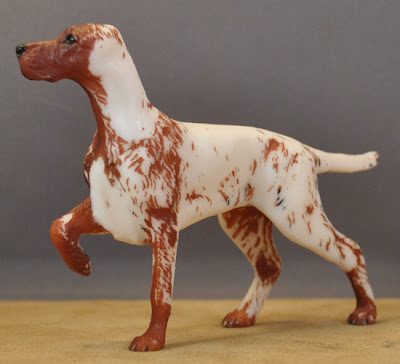 I'm hitting the interior pocket in some spots, so I will have to go and build parts of her back up with Apoxie.
In other news, I am working on other canine projects. Here's one of them: another complete resculpt, the Breyer Labrador to a Labradoodle: 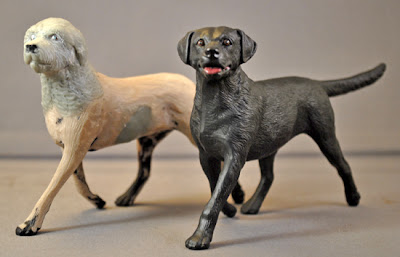 I started by going all over the Breyer Lab body with a sanding drum attachment on the dremel, taking down most of the body (and filling in gaps where needed): 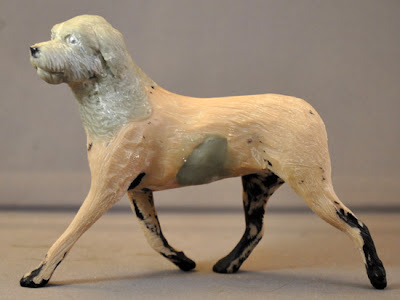 (she was a funny tan color underneath!)


This is so I can build the hair back up without making her look poofy or chubby: See what I mean? If I had simply sculpted over the existing hair texture, she would have come out with a bit of a weight problem!

Still have the paws, tail, and some other spots that need work. Then we move on to a coat color! Probably chocolate, or a color that Labradoodle fanciers call "lavender".

That's all for now, folks. Until next time!
Posted by Dragon Ridge Studios at 5:58 PM No comments:

Customizing the model dog: From longhaired to shorthaired

Welcome back, everyone! Looks like I've really been neglecting my blog. Almost a whole year has passed since I last posted here.

So to make sure I don't take another leave of absence, I shall give you an account of one my latest projects.

As you may have noticed elsewhere, I am now focusing on customizing model dogs. The model dog hobby is steadily growing in popularity, with online model dog shows, and even model dog divisions being held at some live shows. Plus, model dogs make popular sidekicks/companions to model horses!

There are many companies out there that produce fine dog figurines, but not all of them make pieces that are in scale to model horses. A few years ago, Breyer Animal Creations released a line of model dogs (as well as some other animals) called the Companion Animal line. One of these was a sweet little Setter in the classic "on point" pose.

Now as lovely as this little gal is, her breed options are limited because of her pose and coat. Now I've already painted one Breyer Setter(to orange belton), and am working on another (tricolor).

But I feel I can do more with this model, lots more.

Now usually when an artist does something more drastic, they take a model and add more to that model (e.g. add more hair/fur/etc). Say like, taking a smooth coated dog figurine and sculpting all over it to make it a shaggy dog. That sounds easy enough, right? Just whip out the epoxy and slap it on! (of course, a certain amount of sculpting and skill are a good idea).

I wondered how hard it would be to do the opposite: take an already long haired Breyer dog, say, the Irish Setter, and make it into a smooth haired breed, an English Pointer?

So I'm going to find that out, and I'll show you my progress along the way. Today I will share the first few steps.

Stage 1: Preparing the original finish Breyer
What I will be using:
-Breyer Irish Setter
-permanent marker
-small hacksaw
-Dremel, various bits, including the sanding drum
-sandpaper, the finer the grit, the better.
-protective goggles (bits of plastic will be flying everywhere!)
-reference photos (Pointers on point)

-First, I start with the Breyer Irish Setter: 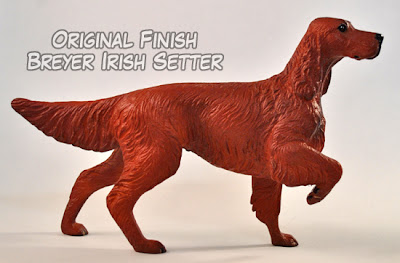 -Then I take a permanent marker. This will be used to mark out where I plan to
sand/cut/saw. 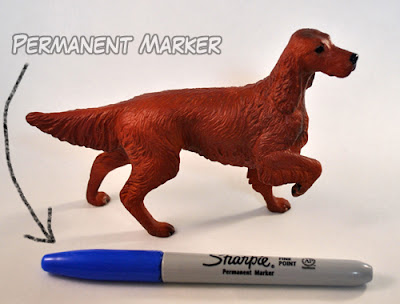 -I use my reference photos to get an idea where the legs (esp. the
hind ones), the belly, and the tail are under all that coat. I also mark off the ears, which
will be removed completely and resculpted. 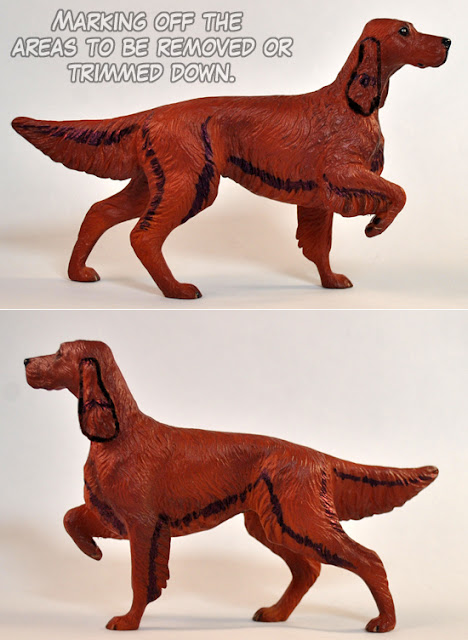 -Next, I use the small hacksaw to remove the ears and front leg feathering. This takes a lot of
elbow grease. I also make sure that I don't cut into the neck or legs, I want to leave as much
of the main body parts as possible(though I inevitably will have to fill spots spots in later on).

After I've removed her ears and as much leg feathering as possible, I take the dremel
(and put my goggles on!) to remove the rest, using either the sanding drum or a smaller metal
bit to get into the hard to reach places (like her raised front foot).

After that, I use the sand paper to smooth it all down. 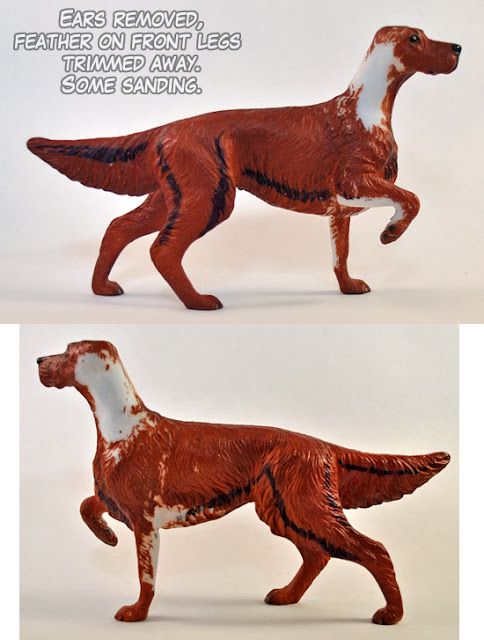 And that concludes it for today!

Next time I will tackle the hind legs, the tail, and the underbelly.

Thanks for stopping by, and feel free to leave a comment, or give some
critique! 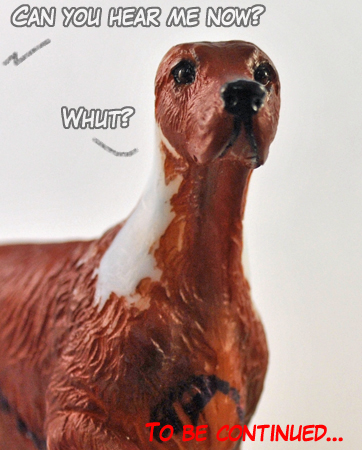 Posted by Dragon Ridge Studios at 6:09 PM No comments: